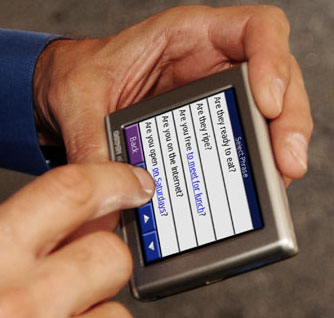 How about having a device that could assist you in your globe trotting exercise by being your navigator, language translator, music entertainment provider, audio book player, and a currency measurement converter? Garmin on Wednesday announced the launch of such a device called NUVI, it also has additional features of being a world clock and digital photo organizer apart from offering qualities of a navigator and entertainer.

Garmin, a known name in navigation devices, is projecting its sleek and easy to use NUVI as the ultimate companion in the foreign land. Gary Kelley, VP (Marketing), Garmin says “The nüvi represents the pinnacle in integrated consumer electronics for travelers. With its amazing array of features, the nüvi makes traveling easier and more enjoyable.”

For a new user, NUVI is promising to be very easy to use. On the introductory screen, you will be offered two simple options: “Where to?” and “View map,” and through them you can approach other navigation functions. The third option on the title page is called “Travel Kit” where you can access the optional Garmin Language Guide with data provided by Oxford University Press. The data is available in nine languages namely American English, British English, French, German, Italian, Brazilian Portuguese, European Portuguese, European Spanish, and Latin American Spanish. The device offers anything between 17,000 to 20,000 phrases per language. The text to speech interface also facilitates the precise pronunciation in the desired language.

NUVI’s Audio Book Player offers you over 70,000 hours of audio programs to help you relax during those long tours. This is in addition to its MP3 player functionality. Designed stylishly, the NUVI has a 3.5-inch (diagonal) color touch screen display, SD card slot, mini-USB jack, and headphone output. Its battery back up is in the range of four to eight hours and it’s easy to be recharged through the attached AC power adapter. All these features combine to tell the traveler the fastest route to approach a destination as well as places like hotels, restaurants, shopping, and tourist attractions at different destinations.

While the new device will be made available to consumers in America immediately, European consumers may have to wait till the year-end to grab it. The price is US $969.22. Why the 22 cents I don’t know, but it’s quite expensive for only having 200MB of internal storage.