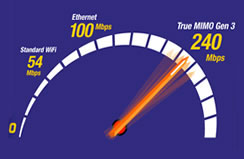 Four year old, California-headquartered Airgo Networks, pioneer and world leader in high performance wireless technology, has launched its third generation True MIMO chipset with support for data rates of up to 240Mbps. For the first time, consumers will be able to experience faster-than-wired speeds over a wireless network – and almost three times the speed of other premium wireless technologies on the market today.

This next generation of True MIMO is currently sampling to select partners, with retail product availability expected by Christmas. The new chipset provides the speed and reliability necessary to enable content (media-rich Internet, large files, video, IPTV, music, photos and games) to be distributed across a wireless network. The biggest plus is that this is carried out without compromises in performance while remaining 100% compatible with 802.11b, 11g and 11a Wi-Fi.

Offering faster connection speeds than 10/100 Ethernet, it eliminates the need for unsightly and inflexible wired connections between devices in the home such as routers, laptops, PCs, set-top boxes, consoles and TVs. For enterprises, Airgo’s third generation technology finally makes the wire-free office a reality. Greg Raleigh, President and CEO of Airgo Networks says, “With True MIMO Gen3 technology, we have achieved a scientific milestone by proving that wireless can surpass wired speeds.”

Like its earlier generation products, Airgo’s third generation chipset is based on MIMO (Multiple Input, Multiple Output), the “spatial multiplexing” technology invented by its founders and now the widely recognized foundation for future wireless products.

Real-world tests show that the new product provides actual TCP/IP throughput of over 120Mbps with uncompressed traffic, surpassing the performance of wired 100BaseT Ethernet. In addition, it features a single chip with two complete radios fully integrated to achieve further aggressive board-level integration, which has resulted in a 15% reduction in the overall Bill of Material (BOM) cost and a 20% reduction in power consumption.