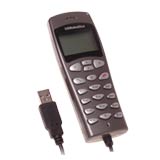 USRobotics this week announced its foray into the $493 million Voice over Internet Protocol (VoIP) equipment market. The company has planned to begin launching its VoIP products beginning next month, the initial line up to be introduced in the market will include a USB internet phone, VoIP telephone adapter, USB speaker phone and a 4-port wireless router with two VoIP phone ports. A formal announcement was made on Monday.

With more than 17 million VoIP users in the country and the number multiplying at a rapid speed, USRobotics efforts to join in on VoIP equipment manufacturing is being dubbed by the company as a logical step to reap the benefits of huge opportunities in the segment. For instance, revenue from North America alone in the VoIP services, excluding the free service providers, was a staggering US $1 billion last year.

Announcing the launch of VoIP products, CEO Joseph Hartnett exuded confidence that they will be received well by the customers, “Our customers are interested in a full slate of products to support their wireless and internet-dependent lifestyles. Our VoIP line of products will allow them to optimize their investment in broadband internet connectivity, by bringing new technology into homes and businesses, designed to make voice communications as simple and comfortable as traditional telephone calling.”

The first VoIP product coming out of USRobotics’ stable will be a USB internet phone, it will be commercially available from October. This phone will be compatible with Skype and other instant message services with voice capabilities. It will also allow you to make free calls anywhere in the world by making use of your PC and broadband internet connection. This internet phone will also have a LCD screen for caller identification apart from the other general features like echo cancellation and noise reduction.