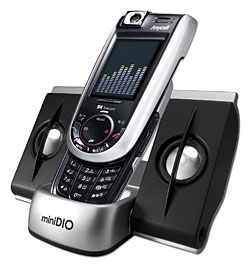 Q-Seven has released the miniDIO, a new small audio dock for cell phones. Q-Seven is claiming that their “Mini Audio” aka miniDIO, is the first cell phone audio dock to be released. It is designed for the increasingly popular MP3 and DMB phones that exist and those that will soon flood the market, if you have one of the Samsung DMB or MP3 phones, I wouldn’t think twice about picking one up. Most of us probably don’t.

miniDIO is essentially two components, a twin speaker and a base unit. The base unit is designed to rotate so that it becomes flat and can be carried with you wherever you go. The speakers simply fold away to the opposite side.

They are rated at 3W, 1.5W each side, a small internal amplifier boosts the sound. I really don’t know how good these could sound, but it would be a good quick way to dock and listen to some tunes at the office. No price is known, but the miniDIO will be avai various manufacturers mobile phones.