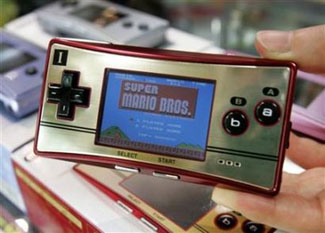 Nintendo has just released the Game Boy Micro in Tokyo, Japan (2 weeks before its US launch) and demand for it has been ‘better than expected’. Although its sales are not as ‘hot’ as when the Game Boy Advance SP was launched in 2003, brisk sales have been reported mainly because of the Micro’s new stylish appeal.

Indeed, the Micro is basically the same as current Game Boy models except for the fact that it is marketed as ‘the world’s smallest console’ and is available to consumers in a more compact and stylish design, which Nintendo hopes will lure women and casual gamers to it.

The Game Boy Micro is currently available in Japan in silver, purple, black and blue. A “limited edition” design in the color of the once famous Famicon game console is also available.

The Micro will be available in the US beginning September 19, and you can have it for US $99. Nintendo intends to have a European debut for the Micro in November, when it will be available for consumers for about 99 euros.