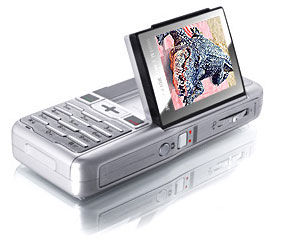 Cell phones these days have everything from digital cameras, mp3 players to FM radios, so why stop there? Chinese manufacturer AMOI, has released their model A660 mobile phone with flip out display and DV camcorder functionality. Being a DV camcorder is no amazing feat, but the display’s flipping mechanism allows the user to control the camera as if they were using a standard DV camcorder (since the lens is mounted on the side of the phone, rather then the back side).

Looking more at the of the A660, I found that it supports a “T Card”, this could mean T-Flash, but that has been discontinued and is now the MicroSD. But there is definitely support for expandable memory, the 12MB available internal memory would hardly be enough for video recording. Which is done recorded at 25FPS at 352×288, encoding is with 3GP. The still camera uses a 1.3 megapixel imaging sensor, battery life is in and around 3-5 hours of talk time and 120 hours standby.

The AMOI A660 measures 106×47.5x19mm and weighs 98.7g including the “T Card”. Connectivity is through GSM, Dual band support which means it will most likely be for Asia and Europe, but our sources indicate that a tri-band model has been developed, which is very good news. The price of the A660, a mere ￥ 2580 (US $320). 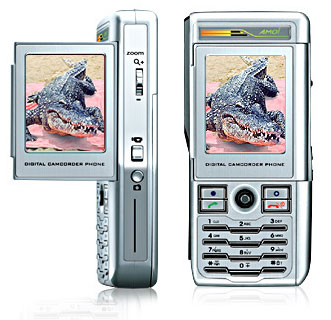