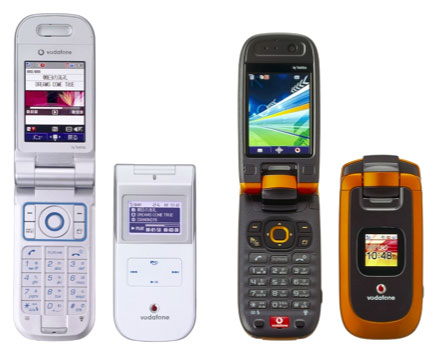 Vodafone K.K., a leading mobile operator in Japan and a subsidiary of Vodafone group, has announced offering two new handsets to its consumers made by Toshiba. The handsets are categorized as 903T and 803T 3G. 903T’s USP lies in the fact that it is world’s first mobile handset which can deliver network supported 2 GPS navigation both in Japan as well as abroad. Vodafone 803T will be a complete music handset player which will offer very easy access to music files.

Furthermore, 903T will support ‘Vodafone live’ network facility which has a voice roaming coverage in over 120 countries in the world. This handset is sleek measuring only 2.4-inch in thickness. Its LCD screen also offers easy map viewing facility and the phone is attached with an auto focus 1.92 megapixel mobile camera. Vodafone 803T which is more inclined to suit the taste of music lovers offer an external Music Console and background play option when using mail or the web. It also has stereo twin speakers, a 2.26 megapixel mobile camera, and Bluetooth features.

Vodafone KK has planned to make 903T available to Japanese consumers from early October while 803T will follow within a fortnight.