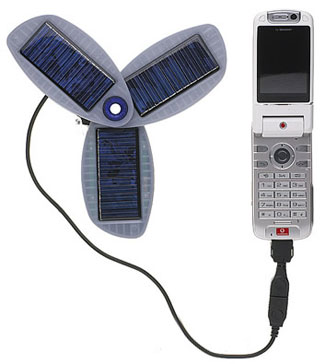 Vodafone Europe has released a solar charger intended to be used for mobile phones. As if cell phones are not mobile enough, now, users can basically count on their mobile phones to be functional anywhere, anytime because they don’t have to go in search of a power socket to recharge them. So long as the sun is shining, you can recharge the batteries of your cell phone.

The new Vodafone Solar Charger does not only cater specifically to one’s mobile phone. You can also use it to recharge your PDAs, handheld games, MP3 music players, digital cameras, and other mobile devices. The solar charger is a flat box that has an internal battery that captures and stores solar energy. It then transfers this energy to mobile devices. Simply open the box, place it outside in broad daylight and connect it to your mobile device.

The new solar charger is also environmentaly-friendly. It’s said that 10,000 customers using the solar charger for one whole year will prevent the atmospheric discharge of 8 tons of carbon dioxide (one of the leading causes of global warming).