Apple is up to it again! They just announced their new Apple iPod nano MP3 player that holds 2-4GB worth of tunes. The new nano is half the thickness of the iPod mini and is set to replace it; glad they didn’t call this one the iPod minime.

The iPod nano will come in four different flavor configurations; 2GB or 4GB in Black or White. It has all the features of the mini, with the added color screen, picture viewing, album art viewing, podcast support through iTunes, and the same interface click wheel that we have all learned to love and other companies have tried to copy with failure.

The new design is really slick looking. They squashed this thing thinner than the iPod shuffle (Shuffle: 3.3 x 0.98 x 0.33, Nano: 3.5 x 1.6 x 0.27). The new nano uses flash memory to store all it’s goodies and can load up via USB 2.0 and hopefully Firewire via a different cable (it isn’t listed on Apple’s site). Also featured is a 1.5” display and 14 hours of battery life. The website also claims that you can charge your battery up to 80% capacity in one and a half hours with a full charge in three hours.

The 2GB version will set you back $199US and $249 for the other 4GB version. Apple is already selling the nano on their website and it comes with a free laser engraving. I’m sure Steve’s personal one says “Try and catch us now, muaha”. 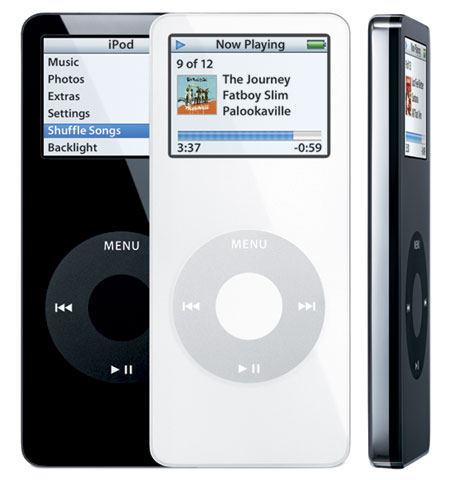