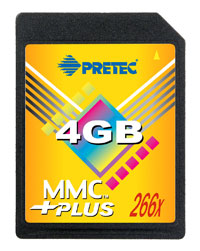 At IFA in Berlin today, Pretec unveiled their 4GB MMC Plus 266X flash memory card that is extendable to 2TB. Pretec is claiming that this is the fastest and largest MMC card in the world.

Theoretical maximum speed of today’s popular MMC 3.x and SD 1.0 cards are 2.5MB/s (16X) and 12.5MB/s (83X) in SD’s favor, however, theoretical maximum speed of advanced specifications call for much higher speed of MMC 4.x at 52MB/s (346X) vs. SD 1.1 at 25MB/s (166X). Pretec 4GB MMC Plus 266X, with access speed up to 40MB/s, doubling the speed of recently announced Pretec 4GB SD card 133X, is the fastest small form factor flash memory card of any format in the world. Pretec 4GB MMC Plus is available now for key customer sampling with unit price of $699 each, mass production is scheduled by Q4 of this year.

Maximum capacity of SD card is 4GB under v.1.1 spec. and is also 4GB for MMC under v.4.1 spec. using so called “Byte Addressing” scheme if the file format of FAT32 is adopted. Pretec 4GB MMC Plus can be configured to be fully compliant with MMC 4.1 specification under traditional “Byte Addressing”; or alternatively Pretec 4GB MMC Plus can be configured under “Sector Addressing” scheme pioneered last year by Mu-Card Alliance in which Pretec is a founding and major contribution member. Maximum capacity of Mu-Card is 2TB (2048GB), which can potentially soon become the maximum capacity of future specification of MMC card. Mu-card Alliance and MMCA has announced the joined forces in June 2005

Pretec has also announced 266X iDisk series at CES 2005 in Las Vegas, the fastest USB flash drive in the world, available by the 2nd half of this year and e-Disk II announced in July, the 1st such bridging device in the world, an expandable USB flash disk by bundling SD/MMC cards which supports both SD 1.1 and MMC 4.x. Other than a flexible capacity USB Flash drive up to 4GB now (expandable to 2048GB), users can adopt e-Disk II as a low cost and very high speed USB SD/MMC card reader to transfer data between computers and IA devices.