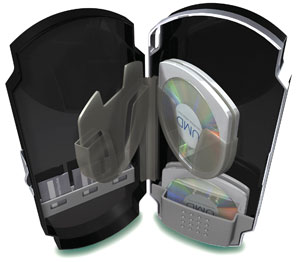 If you own a PSP, it may have become one of the most prized possessions you own, and you also may be perpetually worried about the protection of your favorite games, music and movie packages. If that is the case, then Logitech claims to have devised a solution for you.

Logitech has launched the Logitech PlayGear GamePack media carrier, a versatile protective case capable of carrying up to six Universal Media Discs and three Memory Stick media cards. They claim that its new PlayGear GamePack media carrier will make it easy to carry and protect the growing number of games and movies available for the system. The GamePack is also projected as one that is perfectly in tune with the sophisticated styling of the Sony PSP, which has more than five million of its units now sold in the global market.

Speaking on the new protective gear, Ruben Mookerjee, Director of Product Marketing at Logitech, said, “With all of our PSP gear, we’re aiming to fulfill a variety of needs for PSP owners. The PlayGear GamePack makes it easy and safe to carry a wide selection of games, music, and movies for any outing, while it also reflects the design of PSP with its shape and colors.”

Logitech PlayGear GamePack will be made available to PSP users in the U.S. market from November at a price of $14.99.