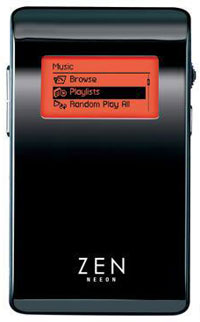 Creative Technology has accidentally sent out about 4000 Creative Zen MP3 music players in Japan that are infected with the Wullik.B e-mail virus. The affected mobile device is the 5GB Zen Neeon MP3 player that has been shipping since May 2005.

On its website, Creative has informed consumers that the infected MP3 players have the serial numbers between 1230528000001 and 1230533001680. The Wullik.B e-mail worm, which is also known as the Rays.A virus, was located in a file in the Zen Neeon’s file system.

Luckily for us, infected MP3 music players are restricted to Asia-Pacific countries (because the Zen Neeon is not available outside this region). It will not infect computers unless the owner attached the MP3 player and then goes over installed files and clicks on the infected file; It will then spread itself through email applications and drop itself into shared folders. However, if you have good antivirus software installed on your computer, then the virus will not spread.

“When you connect an MP3 player to your computer, your PC normally treats it as just another drive. That means you can scan it with the antivirus software on your computer or have the ‘always-on’ protection that’s running on your PC intercept the virus as you try and copy it to your hard drive. So, as long as you have kept your regular antivirus software up-to-date then you should have nothing much to worry about,” according to Sophos senior technology consultant Graham Cluley.