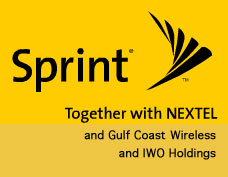 Sprint Nextel reveals that it will be purchasing affiliates Gulf Coast Wireless Limited Partnership and IWO Holdings in deals that are in total, worth an estimated US $714.5 million.

The company is set to buy Gulf Coast Wireless for an estimated US $287.5 million, a figure that includes assumption of debt. As a result of this acquisition, both firms will push for the stay of litigation currently pending in U.S. District Court in Middle District of Louisiana with a final outcome to become effective upon the closing of the purchase.

The acquisition of Gulf Coast is expected to be finalized in the last quarter of 2005. Once complete, over 95,000 PCS wireless consumers will become direct Sprint Nextel subscribers.

Sprint Nextel is also set to buy another affiliate, IWO Holdings for US $427 million. This figure includes assumption of debt, which is currently pegged at US $208 million. The all-cash purchase agreement calls for Sprint Nextel to buy IWO Holding’s outstanding common shares for US $42.50 per share. Shareholders have conceded to vote their shares in favor of the acquisition and Sprint Nextel has the option to purchase these shares, also at US $42.50.

The acquisition of IWO holdings is expected to be finalized in the fourth quarter of 2005. Once complete, over 237,000 PCS wireless subscribers will become direct Sprint Nextel subscribers.