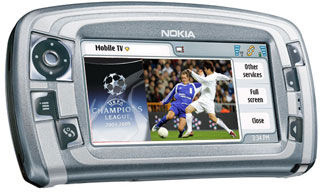 It’s true. A latest Finnish survey reveals that TV on mobile phones is catching up fast. More than that, the viewers have no qualms in shelling out for it. If so, then it opens up fresh vistas for new mobile applications.

Forty one per cent of pilot participants would be willing to purchase mobile TV services; half thought that a fixed monthly fee of 10 euros was a reasonable price to pay. Over half (58%) said that they believed broadcast mobile TV services would be popular.

These survey findings were the outcome from one of the world’s first commercial mobile TV pilots in Helsinki, Finland. Digita, Elisa, MTV, Channel Four Finland (Nelonen), Nokia, TeliaSonera Finland and YLE jointly conducted the pilot in Finland between March and June 2005 with 500 users accessing mobile TV using the Nokia 7710 smartphone and DVB-H technology.

According to the pilot results, familiar programs available through national Finnish television channels proved to be the most popular followed by sports and news channels (CNN, BBC World, Euronews). The Ice Hockey World cup games, the San Marino and Monaco Formula One as well as the UEFA Champions League match between Liverpool and AC Milan were among the top 10 programs viewed during the pilot.

In general, mobile TV users spent approximately 20 minutes a day watching mobile TV, although more active users watched between 30 to 40 minutes per session. Participants also watched mobile TV at different times than traditional TV peak hours. Pilot members were charged a monthly fee of 4.90 euros although half of those that took part thought 10 euros per month was a reasonable price to pay. Overall, users preferred a fixed pricing model, while others showed interest in a pay per view model.

The pilot results also reveal the key requirements from consumers in order to use mobile TV services: Easy and intuitive service usability, good technical functionality and reliability, suitable content for short period viewing. Above all, mobile phone functions must not be compromised by the TV application.