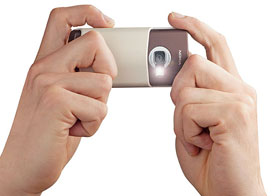 The study called the Mobile Imaging Survey, shows that camera phones are not really seen as a huge threat as digital camera prices decrease. On the contrary, camera phones are spurring interests in digital photography amongst users. Mobile Imaging Survey data indicates that more than 30% of camera phone owners intend to buy a digital camera because they got interested in digital photography as a result of using the features in their camera phones. In the end, most US consumers still prefer using regular cameras to take important family or vacation pictures.

“We are a pretty traditional culture here and we identify with traditional form factors like camera, and we still use phones (primarily) for making calls,” according to analyst Chris Chute.

IDC further provides the following: approximately 4 billion snapshots were taken with camera phones in the U.S. in 2004, and an estimated 7.5 billion will be taken again in 2005. That’s a big figure but nothing compared to the expected increase in digital camera picture taking, from 28 billion in 2004 to 40 billion in 2005. Further, photo printing of pictures shot through camera phones have decreased from one picture per user per month in 2004 to one picture per user every three months in 2005.