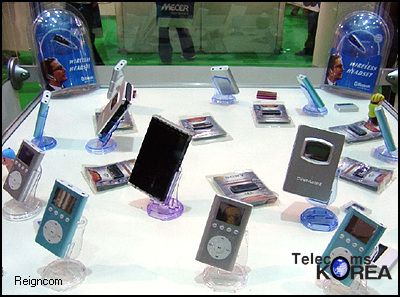 The scourge of pirated or illegal copies of original MP3 players is on the rise, resulting in a huge losses for original makers such as Regincom, Apple and Samsung Electronics. Chinese companies seem to be at the forefront in flooding the global market.

Regincom, the South Korean consumer electronic giant, has raised alarms early this week over the illegal Chinese invasion of the MP3 player market. According to Regincom officials, during the mega IT Show held in Brazil, Chinese companies have brought out a large number of MP3 players which are illegal copies made by Regincom and its South Korean compatriot Samsung and Apple of the United States.

Regincom, parent company of portable music player maker iRiver, is currently the world’s number one in MP3 players with flash memory sticks – a position Apple is hoping to take over with the iPod shuffle. The company recently announced a HDD player that is a competitor to the iPod mini – the iRiver H10 is able to hold 1,200 songs.

The visitors to the Brazilian exhibition were witness to fake iRiver N10 models being displayed on the stalls that stacked the Chinese consumer electronics wares. Strangely, the earphone-cap is not removable and the USB port was positioned on the side.

Imitations of the iPod Mini were equally on display. However the finish did not match the original from Apple. These duplicators did not show any partiality in ignoring Samsung consumer electronic gadget designs. They had chosen the Samsung YP-T7 to prove to the world their reverse engineering expertise with their fake product. Sony of Japan was also not spared. Its Sony NW-E500 occupied the space alongside the wares from its rivals drawn from across the globe. Other fake products on display include an illegal copy of the iRiver iFP-300, iRiver IFP-900, Samsung Yepp, YP-F1, YP-F6 and iPod earphones