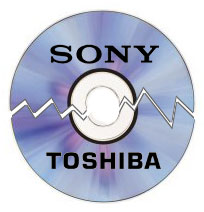 Toshiba has ruled out any further discussion with Sony Corporation over the issue of finding a unified format for the next generation of DVDs. Earlier this week, a Japanese newspaper had reported that talks had failed between the two electronic global giants. Though there was no official confirmation of the report from either side then, on Thursday Toshiba president made a statement that his company has no plans to revive failed talks.

The issue of a next-gen DVD format has clearly divided the DVD manufacturers into two camps — spearheaded by Sony and Toshiba. Toshiba leads a group supporting the HD DVD format, while the Sony-led bloc backs the Blu-ray format. Sony’s Blu-ray disks is believed to have a more sophisticated format and play back of 25 gigabytes of data, compared with HD DVD’s 15GB. Sony’s blu-ray format, however, is more expensive.

The two blocks had developed their respective formats separately but it was to do away with the growing confusion in the minds of consumers over the issue of different formats that the two sides had agreed to look for a way out. But negotiation has hardly helped them in budging from their own respective stances. “We have no intention on settling on a compromised format that only plays back 20 GB, for example,” said Taro Takamine, Sony spokesman earlier this week. Toshiba spokesman Junko Furuta reacted by saying, “We have doubts as to whether the Blu-ray format is a viable technology in terms of production cost. We’re also not convinced that consumers would need to store so much data on disks, especially now that internal hard drives are more popular.”

The development of this weeks event, has completely evaporated any idea of a unified next gen DVD format. According to a market buzz, both sides will now aggressively go ahead with their plans in developing products based on their respective DVD formats. Toshiba is planning to launch HD DVD players by the end of this year, while Sony’s popular game console PlayStation 3, based on Blu-ray disks, will be commercially available from spring next year. Consumers can prepare for another VHS/Beta scenario.