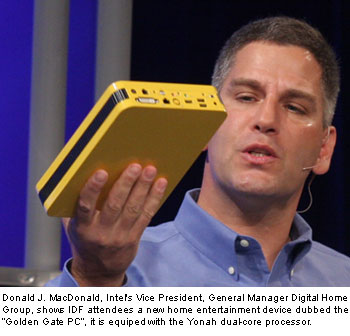 Intel has unveiled its next-generation microprocessor chips to the public, the dual-core mobile Merom, the desktop-based Yonah and Conroe, these are meant to enhance the capabilities of personal and corporate computers for the next five years. The dual-core technology chip was shown this week at Intel Developer Forum in San Francisco.

The new chip design promises greater power efficiency and this is the particular point which Intel is projecting as its USP. Intel is even claiming that over a period of time, the power efficiency and performance capabilities of its chips would multiply tenfold. Intel Chief Executive Paul Otellini says, “It’s time to take things to the next level. From now on, chip performance will be measured.”

The company has planned to launch three versions of the semiconductor chips based on their new designs in the second half of 2006. Each chip will consist of two processors to avoid overheating and to improve efficiency.

Reacting to Intel’s new chip design, most of the market observers feel that Intel is betting big on its latest offering slated to carry the company’s reputation and innovations for next half a decade. It isn’t surprising, Intel’s chips have sluggishly escalated from the Pentium to the Pentium 4 without drastic technological improvements, this in itself has almost taken half a decade.

According to Kevin Krewell, editor in chief of the Microprocessor Report, Intel has set a sales target of 1 billion for chips over the next five years. An analyst with TechKnowledge Strategies, Mike Feibus, believes that the company is spending a staggering sum of $5 billion to $10 billion on the 65-nanometer factories that will build these new chips.

It is important to note that Intel hasn’t introduced any new chip designs since Pentium 4 for desktops in 2000 and the Pentium M for laptops in 2003. The new chip design is also expected to help Intel do some catching up exercise with Advanced Micro Devices (AMD), whose Opteron chip launched in 2003 has outshone Intel’s Pentium 4 in the market.