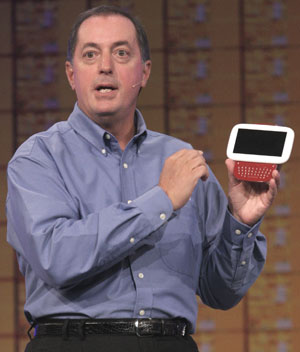 Intel is all geared up to meet the challenges of the future wherein demands for ‘mobility ubiquity’ is all set to skyrocket. Adoption of wireless broadband services coupled with high performing developments in mobile devices are all signs of the beginning of a new era in mobile computing, company officials claim they are ready for the new scenario. Company’s top executives were present at IDF forum where they expressed their views to promote ‘mobility ubiquity’.

Touching on the point as what the company sees as future challenges and the possible growth engines, Sean Maloney, Executive Vice President, Intel, said, “The number of voice lines worldwide skyrocketed with the proliferation of cellular phones, which made the phone truly personal. At the same time, the Internet has unleashed an insatiable demand for computing power. Now, if we can deliver ubiquitous broadband based on open standards and drive performance and power innovation on computing and phone platforms, mobile computing has the potential for continued dramatic growth.”

As part of their plan to focus on mobility ubiquity, Intel has unveiled several new capabillities which will be the basis of Intel’s next-generation mobile platform, codenamed Napa. The core objectives behind these products would be to lower power consumption levels and yet enhance graphics and wireless capabilities.

They are also going to great lengths with their mobile innovation drive. The company is all set to launch a dual-core mobile processor, codenamed Merom, in the second half of 2006 which they claim to have three times the performance per watt of it’s predecessor. Intel’s new Viiv PCs, set to be the complete home-based media center with DRM support, will also use dual-core technology alongside the Yonah and Conroe processors.

Clearly, Intel seems to be leaving no stone unturned to promote ‘‘mobility ubiquity.’