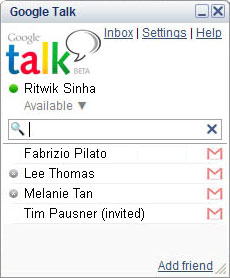 After Google unveiled Google Talk, a combination of instant messaging (IM) and voice services earlier this week, an intense debate cropped up in the industry on the fate of their software. No doubt, with its mega reputation, Google’s entry is being viewed as a major development, but opinions are divided whether the company has entered the fray at the right time.

Analisys of the IM market shows key trends in fragmentation, despite the presence of some dominant players like America Online (41.6 million subscribers), Microsoft Corp. (14.1 million subscribers) and Yahoo Inc. (19.1 million subscribers). There are many experts who believe that some concrete business and revenue models are yet to fall in place for the companies providing these services. Says David Edwards, an analyst at American Technology Research, “It’s hard to say who’s going to rule because the business models are still fairly new. There’s still a lot of development left to go.”

Different IM service providers have different strong points. For instance, Microsoft’s MSN Messenger is believed to be more popular among corporate users. America Online’s AIM services are extensively used by the financial community and Yahoo is believed to deriving its strength from entertainment-related add-ons with their IM service. So where does it leave Google? But David Edwards says that getting in may not be all that tough for Google as is being expected now. He says, “Google has clarity about its goals. It should have success in building a user base from its community.” Where Google might have a chance in giving its competitors a run for their money is if it blends search capabilities to its IM and voice offerings, points out an analyst.

There is also a school of market observers who believe that Google can deliver a deadly blow in the now four large players market, if it decides to provide its new services in the pockets of mobile users; smartphone and pocket PC device versions. But as analysts read into the current situation, Google will test the waters for sometime before taking any decision to change its operational gears in providing its IM and voice services.