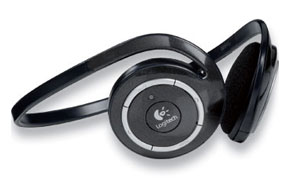 Here is some good news for all those who love to enjoy digital music wherever they please. Logitech, much known for its anywhere wireless technological expertise, has announced the launch of several new wireless devices to make music listening much more mobile. First is the new Wireless Music System for PC, it’s capable of streaming any format of digital audio from the PC to a home stereo system or even to a separate speaker.

The company claims that its Wireless Music System for PC is a simple, three-piece solution comprising of a USB music transmitter for connectivity with the PC and a music receiver that could plug into a home stereo receiver and a wireless remote control. With this new system, listeners can enjoy all of their PC audio in any corner of the home in a matter of few minutes. Ray Weikel, director of product marketing for Logitech’s Audio Business Unit says, “With the Wireless Music System for PC, people can enjoy their favorite playlists or Internet radio on their living room entertainment system. The product takes less than five minutes to set up, and it works without any cables or adapters, without a Wi-Fi network, and without any restrictions on file format.”

Carrying a price tag of around $150, the latest wireless music offering from Logitech is targeting a very strong emerging class of listeners who buy digital music tracks through online music stores like Apple’s iTunes. In fact, a recent study by Parks Associates reveals that two-thirds of online U.S. households listen to music on a home computer. The new system will be available in the US and Europ beginning next month.

Meanwhile, in its effort to further endear itself to the category of music lovers on PC, the company has announced a simultaneous launch of the Logitech Wireless Headphones for PC. The new device will facilitate the listeners to get away from their PCs and move to any corner of the house while enjoying the music of their choice. The headphone promises a transmission range of up to 50 meters (165 feet) from the PC. This lightweight, behind-the-head design will be made available to the same markets by the beginning of October and is likely to be sold at a retail price of $129.99.

Last and certainly not least, the Logitech Wireless Music System for iPod. This $150 two-piece, plug-and-play solution for the Apple iPod comes with a music transmitter, this connects to any portable music player´s standard headphone port and a music receiver that plugs into a home stereo receiver or multimedia speakers through an RCA port or a 3.5 mm jack. The Logitech Wireless Music System for iPod will be available in the U.S. and Europe, beginning in October.