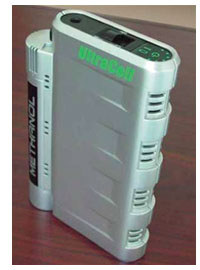 UltraCell introduces its reformed methanol fuel cell (RMFC), a new power source for portable electronic devices with two times the energy density of lithium batteries. RMFC utilizes a breakthrough micro reformer technology that produces fuel-cell-ready hydrogen from a highly concentrated methanol solution. UltraCell’s new fuel cell has the energy density of a hydrogen fuel cell. However, it utilizes easily accessible and inexpensive methanol fuel. It’s quite light and compact too; at around 40 ounces, the fuel cell unit is just about the size of a paperback novel.

UltraCell’s breakthrough technology is developed to function in a user-friendly package that, with the push of a power button, self starts and feeds power as required. Its spent fuel canisters can be “hot swapped” to ensure a nonstop supply of power wherever you may be.

RMFC technology was first developed by UltraCell as a prototype for the military. Known then as XX90, it was developed to produce up to 45 watts of uninterrupted power. The U.S. Army’s Communications-Electronics Research, Development and Engineering Center then contracted UltraCell to proceed and speed up its development of a more compact portable system to run at 25 watts. The resulting power source of this endeavor will be for commercial use and will be known as UltraCell25. It is expected to be available in 2006 for professional, industrial and mobile computing applications. Its military version will be called the XX25.