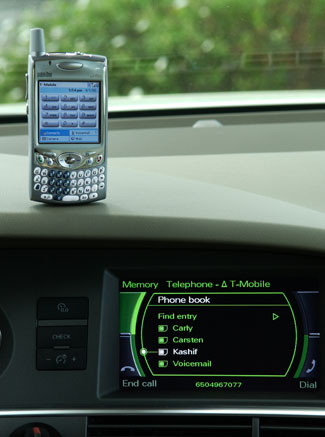 In a collaborative effort meant to enhance safety and convenience of consumers at the wheel, Palm, a leading name in mobile computing and Audi, a global automobile major, have launched a new generation of communications solutions. The solution offers a fully integrated hands-free calling solution and offers built-in Bluetooth short-range wireless support for the Palm Treo 650 smartphone, whether other Bluetooth capable devices will or can be supported is unknown. But the new communication features can be easily accessed by owners of the 2006 Audi A6 and A8 vehicles, they now can make and receive calls by using the car’s MMI (Multi Media Interface) console, voice-recognition interface or steering-wheel controls.

The co-developers of the new solution are projecting it as a major innovation. “As the convenience of smartphones and wireless access continues to expand worldwide, an important next step was to integrate these technologies into cars in a way that places safety first. Now drivers can keep their eyes on the road and hands on the wheel, while using the Treo 650 to communicate with the outside world”, says John Hartnett, Senior Vice President, Palm Inc. Adds Stephen Berkov, Director (Marketing), Audi, “We share very similar user demographics and leadership in design, technology and brand loyalty. In light of these similarities, we saw a special opportunity in the intersection of car and phone technologies.”