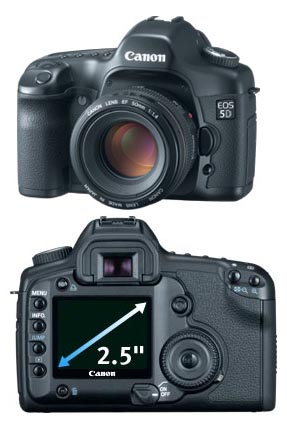 Canon has officially announced their upgrade to the 20D (or downgrade to the 1Ds, however you see it) today which features a full frame 12.8 megapixel CMOS. There were way too many rumors floating around on various forums as of late, but they finally released the info to the masses today.

The new camera will appeal to wedding, photojournalists and other various professionals due to its high resolution and full-framed imaging sensor. The camera is also capable of 3.0 frames per second for burst duration of 17 RAW files or 60 JPEG files. The camera might appeal to sports photographers, but the lower FPS than say the 1Ds Mark II (8.5 fps) might keep them away from this setup.

As for the body, it is housed in a magnesium alloy casing that is slightly larger and heavier than the 20D. It will also feature a larger 2.5-inch LCD screen (230,000 pixels). The camera has no pop up flash or auto focus assist lamp, but if you are serious about your work, you will grab a speed light. Also, as another important note, this camera won’t take EF-S lenses like the 20D, only EF will work.

I wonder what Nikon’s answer to this will be? Where is that darn D200? They better get in the game soon or Nikon users are going to jump ship.