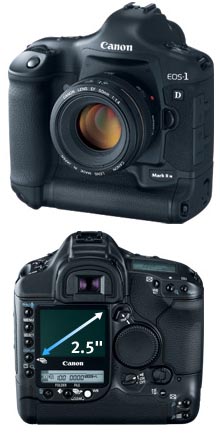 Canon announced an upgrade to the popular 1D Mark II. The new version, which has an N attached to the model name (EOS-1D Mark II N) has a bunch of new features that adds slightly more value to the camera.

The only big changes that come with addition of the ‘N’ is a 2.5” wide viewing angle CLD monitor, a new ‘Picture Style’ image parameters, better buffering, and the ability to write to both SD and CF cards simultaneously. The 8.2 megapixel CMOS, the 8.5 frames per second, and the DIGIC II image processor remain the same.

The new ‘Picture Style’ parameters allow the user to view the picture with sharpening added. Unlike the old EOS-1D that didn’t apply any sharpening.

All in all, not that many improvements to the new version. The EOS-1D Mark II N will retail for a price of $3999 when it hits streets in September.