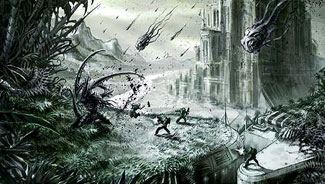 Speaking on the launch, Gregg Sauter, Director, Games Publishing, Nokia said “Developed by Razorback, our version has maintained the original’s well designed systems and game play and provides fans with an authentic Warhammer 40,000 experience. Mix in a highly immersive experience where gamers can play anywhere, anytime and the ability for Warhammer 40,000: Glory in Death fans to play against other fans via the N-Gage Arena, and we think gamers are going to be thrilled.”

The game depicts a time which is set in the distant future. Warhammer 40,000: Glory in Death on the N-Gage platform delivers the entire Warhammer 40,000 experience where players are given the option of controlling one of the four races: the Orks, Space Marines, Eldar and Chaos Marines. This is further boosted by original in-game character artwork designed by Mike McMahon, one of the most popular comic artists in the world today.