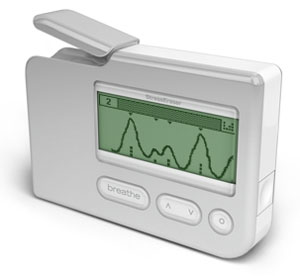 You may not realize it, but physical, mental and emotional stresses do have the tendency to silently creep in and zap your vitality. Such is the demand of a modern, break neck paced life. With stress showing up in epidemic amounts, the market is flooded with a host of stress buster solutions.

New York based Helicor has announced the introduction of a new handheld biofeedback device called StressEraser, the company claims the device has been designed to quickly calm the body and the mind, anytime, anywhere. The formal announcement came at the ongoing 113th annual convention of the American Psychological Association ( APA) where visitors were allowed to test the device.

The company plans to first put the StressEraser to some pilot tests before a full-fledged launch in the market sometime later this year. Explaining the precise roll out plan of StressEraser, Adam Forbes, Founder & CEO of Helicor says, “Our initial target markets will include health care professionals and their patients. After that, we plan to expand into consumer markets. Our long-term goals are to clear the StressEraser with the FDA for the treatment of a variety of stress-related conditions, and to obtain coverage for the StressEraser under major health insurance plans.”

Helicor is claiming that StressEraser’s development has involved more than four years of research and an investment of $6.4 million. The new product is likely to carry a price tag of US $399 for consumers.