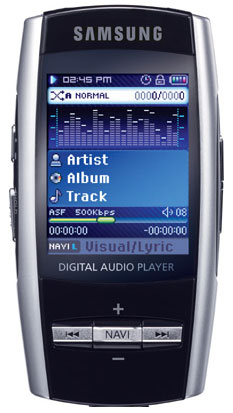 Never say die. As part of their efforts to have a bigger slice of the MP3 music player pie currently dominated by you know who, Samsung Electronics plans to bring to market six new MP3 player models in the second half of 2005 and as many as 10 more in 2006.

In the first half of this year, Samsung released six new models that were added to their eight-model range of Yepp MP3 players to help treble yearly unit sales to over 5 million. Note that this target is still just 1/6 of the anticipated unit sales of the iPod by Apple Computer. As such, Samsung intends to provide more models so that it can increase its market share to more desirable levels. A move that is not really surprising seeing that Samsung estimates the MP3 player industry to be currently at about 45 million units. A figure that is expected to increase to over 60 million units in 2006.

“We will have a total of 12 new MP3 models this year and plan to introduce 5-to-7 flash type models and some two hard disk drive models in 2006,” according to Park Hyun-joo, an Assistant Manager of Samsung’s marketing division.

So now you know what to expect – ‘coming soon’ MP3 players from Samsung will feature high-capacity storage to enable users to download even more of their favorite audio and video files. Further, users will be able to play games or view digital photographs while listening to music.