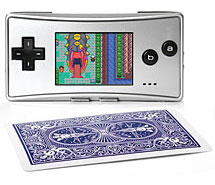 Japanese video gaming major Nintendo, is all set to launch its popular Game Boy Micro, a portable mobile phone-sized game console. The official announcement for the proposed launch was made at Leipzig, the venue of Europe’s biggest computer games fair, on Wednesday. The GameBoy Micro is expected to ship to Europe in November, but not before Japan and the US will get it as early as next month.

To be priced at 99 euros for the European consumers, the new gaming device will be available in different four different colours; metallic pink, green, blue and silver. Game Boy Micro will be introduced in the American market by September end and will carry a price tag of US $99.

Analysts are however a bit surprised at the pricing of the Micro since it coincides with the prevailing rate of Nintendo’s current console model in the European market, they feel that the new gaming device should have been priced lower to boost its sales. But the company seems to be unperturbed. Jim Merrick, Nintendo’s European Marketing Director says, “Non-gamers thought the price should be lower but gamers thought it should be higher.” The company, however, has declined to comment on fixing any sales target for Micro in the European market but has confirmed that it will make its launch move with 500,000 units of the device.

The Micro console is based on Apple’s iconic iPod design. With a weight of just 85 grams (3 ounces) Nintendo is claiming that Game Boy Micro is the smallest gaming console in the world.