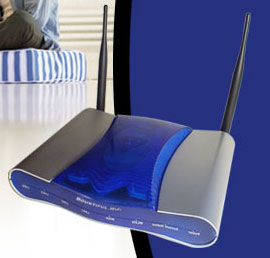 Bountiful WiFi brings to market the Bountiful Router, a wireless router that the firm claims is capable of covering an area up to 4x more than competing wireless routers.

Current wireless routers in the market today function at 15 to 17 decibel milliwatts (dBm). The Bountiful Router on the other hand functions at almost 30 dBm fueling Bountiful WiFi’s claims that it can stretch the wireless range of traditional routers by two to four times. According to the firm, Bountiful Router can reach up to 1,200 feet and maintain an 802.11g data rate of 48 Mbps even at 600 feet. It does not need extenders, repeaters, boosters or amplifiers.

Bountiful WiFi also intends to launch a wireless access point and a point-to-point outdoor wireless gadget by the end of 2005. “The company is committed to offering unmatched wireless technology, and the Bountiful Router will be the first product to confirm this commitment,” according to Bountiful WiFi CEO David Egbert.

The Bountiful Router retails for US $625.