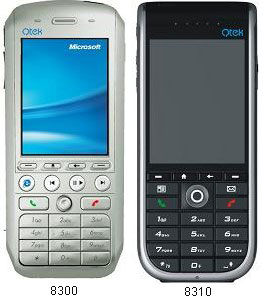 Qtek has just unveiled two new versions of mobile smartphones which have the inherent feature of running Windows Mobile 5 with Wireless networking capabilities. Christened as the Qtek 8300 and 8310 models, these phones promise to be the first one in their segment to carry Wi- Fi features along with regular cellular protocols.

In addition to Wi-Fi features, the 8300 series phones also have quad-band GSM / GPRS capabilities with EDGE. Both handsets boast of 320×240 pixel screen, 1.3 Megapixel camera and MiniSD slot. The Qtek 8300 has dedicated media playback buttons, while the 8310 has been designed with 2 application keys for the same function.

In appearance terms, the Qtek 8300 looks more identical to the Qtek 8200 version. While designers of Qtec seem to have worked much harder on 8310 series, this is because of the darker shades in design which could evovle into an identity of its own.