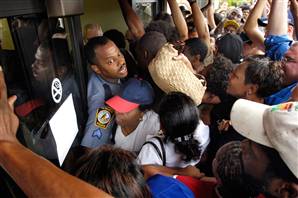 Throwaway price sales do have a tendency of causing things to turn out of gear. This is what became evident on Tuesday at Richmond International Raceway Complex in Henrico County, where a rush to buy second hand laptops at $50 turned into a violent stampede resulting in injuries to 17 people, out of which four had to be admitted in the hospital for treatment.

The bizarre scene was created when a strong mob of over five thousand people turned out at the Richmond International Raceway, these people came to get their hands on one of the 1000 pieces of 4-year-old Apple iBooks that were put up on the sales block. But given the serpentine queue (buyers had started gathering at the venue six hours before the gates opened), many became impatient fearing that they would miss the golden opportunity of buying a product, which carries a price tag ranging between $999 and $1,299 on the shelf,. People were seen hurling folding chairs at each other and many of them were thrown on the pavement. The rush was so maddening that one woman even opted to wet herself rather than giving up her position in the queue.

“This is total, total chaos,” said Latoya Jones, 19, who received minor injuries and was seen limping out of the venue. “I’ve never been in something like that before, and I never again will,” said Alexander, who had come to buy cheap laptops with her 14-year-old twin boys. “No matter what the kids want, I already told them I’m not doing that again,” she added.

The violent mob was only controlled after the Henrico County Police department intervened, but not before the point was proved that selling cheap has its own share of pitfalls.