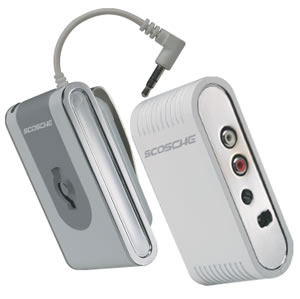 It’s here! The much-awaited Bluetooth wireless interface for iPod and MP3 players is now hitting retail stores. So what makes this transmitter so hot? It enables streaming audio from your iPod or MP3 player to your car or home receiver.

The Bluetooth wireless interface connects directly to the headphone output connector of your iPod or MP3 player and transmits to a Bluetooth receiver connected to the supplementary input of your car’s head unit or home audio system. As such, you can now listen to digital sound CD quality audio in your car and in your home – minus the wires.

Scosche’s Bluetooth wireless technology comes as part of a range of receiver and transmitter kits.
The car kits differ based on the cradle (#IPBCK for the iPod and #UBCK for MP3 players). The iPod interface works with all 3G and 4G iPods and iPod minis, while the MP3 player interface works with any MP3 players with headphone jacks (all of them). Both function with aftermarket head units and RCA inputs. The iPod and MP3 player car kits sell for $249.99 each.

The home kit for the home receiver plus the Bluetooth wireless kit sells for $129.99 and $249.99, respectively. Quite pricey for a Bluetooth audio transmitter, but we haven’t seen many out there, so this could be why.