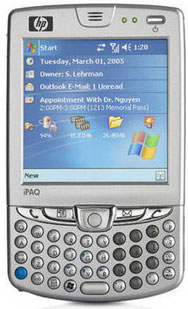 Going by a strong market buzz, Hewlett-Packard (HP) is gearing up to launch several new versions of its iPAQ wireless personal digital assistants soon. The new versions will be categorized under the hw6700 series of iPAQs and are also likely to possess a future version of Microsoft’s mobile operating system.

Recently, HP had released information a bit too soon about the new products on the US and UK websites, but now it has been removed. An HP spokesperson has also refused to comment on it, sources say that the hw6700 devices will be launched in January of 2006. The new version is tipped to have more storage and Wi-Fi capabilities with a similar design to their hw6500 series. The speculation around the launch date is based on the fact that Microsoft will be launching an updated version of Windows Mobile 2005 operating system around the same time.

Based on the information given on the HP UK site, the hw6700 series will have an integrated 802.11g chip for quick connection to Wi-Fi networks – a feature which is not available with its most updated hw6500 series presently in the market, and also lacking in the BlackBerry and Treo products. The new series of 6700 devices are also likely to have 128MB of ROM and Microsoft’s Windows Mobile 2005 Second Edition operating system which is still in development stages.