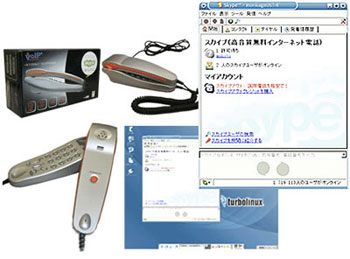 The world’s first cyberphone is now available in the market, though in selective markets for the time being. Turbolinux, Inc., a global leader of Linux-based solutions who has their headquarters in Japan, has announced that they will soon be globally selling CyberPhone K for Turbolinux, a USB handset which has been exclusively developed for Linux drivers. This is a first handset of its kind in the world, it facilitates free peer-to-peer Internet Protocol (IP) voice calls using Skype software and service.

CyberPhone K handset has been developed in a way that enables free P2P phone calls anywhere in the world between Skype users. The only thing which is required for its functioning is a connection between a USB port with a Skype-installed PC. The handset promises to provide high-end sound quality to its users. Its use is also very simple: the Skype users will be provided with a dial key sequence just like any other handset that is being used today.

Interestingly enough, the CyberPhone K was originally designed not for Linux users but rather Windows. Due to the sudden increase in Skype users, left not much time at Turbolinux’s disposal, the company had to develop the Linux driver for CyberPhone K since it was already working as a Linux distributor and leveraging knowledge of Linux technology for this project became easier.

The world’s first cyberphone is presently available to consumers in Japan where each handset is being sold in the price range of around $80.