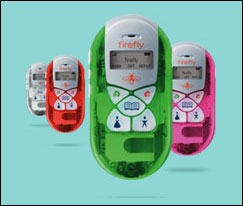 “If you want to catch adults, first catch the attention of their children,” thus goes an old marketing saying. And Rogers Wireless, Canada’s leading wireless communications service provider now seems to have adopted a strategy which underlines an improvisation of this maxim.

The company this week launched the Firefly phone, a device exclusively meant for Canadian pre-teens with the bill controlling string put in the hands of their parents. The Firefly phone enables pre-teens to stay connected with their near and dear ones and the same time the parents will have the leeway of controlling monthly costs. Instead of a regular dial pad, the phone consists of five keys where parents can program a maximum of 20 outgoing numbers into the phone by keying in a specific PIN. Says Raj Doshi, Vice President, Roger Wireless on this new service, “Our research shows a real market demand for an innovative solution like the Firefly phone that gives parents the peace of mind of staying connected to their pre-teens, without overindulging them or risking misuse. And while pre-teens may not be ready yet for the responsibility of a traditional wireless phone, their busy lives can indeed benefit from this tool.”

The phone also boasts of speed-dial keys for Mom and Dad and has been launched in various appealing designs to suit the interests of the pre-teens consumers.

Industry observers feel that in order to make the FireFly brand of phones more attractive, Rogers will soon introduce educational games with the phone, something which Enfora and Leapfrog are trying to do with TicTalk mobile phones. Stay tuned for more on these devices in a future MobileMag review.