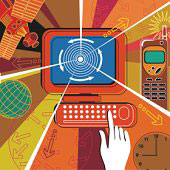 In that perpetual competition between media streams, Internet seems to be making rapid strides at the expense of television viewing and radio listening in Canada. A new study titled “Online News and Information Seeking: What the Future Holds” which was recently conducted by Ipsos Reid, hints a decline in television viewing in Canada whereas addiction to the net is on a rise.

The report clearly says that within a short span of three years (2002-2005), there has been a whopping jump of nearly 50 percent in Internet usage by an average Canadian on a weekly basis. In precise number terms, net users in the country are now spending an average of 12.7 hours now versus 8.7 hours in 2002.

With 14.3 hours of average weekly viewing, television still stays at the top of the chart of most popular media sources, but the Internet is fast at catching up. Especially due to the push coming from young net users. According to the study, young internet users in the country are spending as much as 14.7 hours online on a weekly basis. And this is primarily because young Canadians are making full use of the Internet’s multi-utility functions like MP3 downloads for their mobile devices, ringtones, online chatting, researching, etc. Meanwhile, in the war of grabbing attention among media sources, radio seems to have been severely hit in Canada in recent years with average weekly listening dropping to five hours from 11 hours a few years ago.

Says Catherine Rogers of Ipsos Reid on the findings of the study, “For the first time since we began tracking these activities, younger Canadians are spending more time on the internet than watching TV.” She further added, “This change in media consumption has significant implications for advertisers and marketers. Any advertiser looking at this demographic should be re-evaluating their marketing strategies.”

The poll clearly earmarks that Canadians turned to the internet for niche news – like from health and tourism sectors. But for the general news, television still remained their most preferred medium. The poll was conducted between March 30 to April 27 this year and over 1000 people were interviewed through the Internet and direct phone calls.