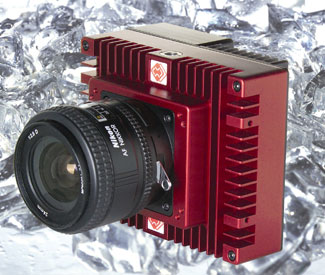 Redlake, the industrial camera manufacturing major, has made a new addition to its renowned Redlake’s MegaPlus II camera range. The new model which has been christened as Redlake MegaPlus II EC110000 boasts of a stunning picture quality and the company itself is calling it “the most comprehensive high-end product range in the industry.”

Dubbed as an ‘actively cooled industrial camera’, EC11000’s USP lies in its ability to separate and isolates the camera’s primary electronics from the sensors cooling path. It is also laden with a fan optional design, which facilitates it to operate in cooling modes even without the attachment of a fan accessory — its major calling card. The latest addition is being seen as an improvisation of the immensely popular 11MP ES11000 range of camera. The new addition supports up to five frames per second (FPS) at 12-bits per pixel and through the use of Peltier cooling substantially reduces dark noise as well as thermal drift.

Commenting on the key features of the new camera, Jay Kelbley, Product Manager, Redlake said, “The EC11000 merges Kodak’s high resolution 11MP image sensor with active cooling technology, resulting in stunning image quality. The design intent enables us to maximize cooling of the sensor without a fan, opening up new opportunities for customers who would not have previously considered a cooled camera due to fan vibration.”

Redlake is exuding confidence that EC11000 will be an instant hit with the customers as they have unique features to target specific customer applications. The new camera will be available for delivery from next month.