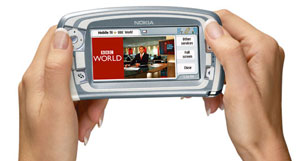 Are you fanatic about the IAAF World Championships in Athletics and would hate to miss any of the the excitement? Not to worry. Mobile TV broadcasts of the event will be available to viewers, various packages with consolidated results and reports will be broadcast at frequent intervals to supported mobile phones.

One of those is the Nokia 7710 smartphone, it’s equipped with a special mobile phone accessory that is required to view Mobile TV broadcasts. The Finnish mobile TV pilot has been thoroughly tested with groups and is scheduled to go live at the end of August. How much time do you think an average user will spend time watching Mobile TV? If your estimate is less than five minutes per day, then you are off the mark. Detailed studies have shown users spending as much as thirty minutes a day watching Mobile TV. Of course, the time spent watching Mobile TV will also depend on quality, cost and content.

Though YLE (The Finnish Broadcasting Company) will cover the sports event, other channels such as MTV 3, Nelonen, CNN, BBC World and Eurosport TV will be available. It won’t be long before we have mobile coach potatoes sitting on subways and watching their favourite program on the way to work, so much for small talk.