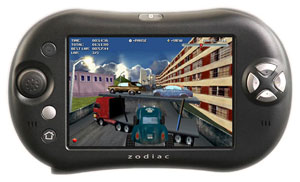 The Zodiac was their first product, code-named “Helix”, it was to be released later that year. It began selling early for $299 (32MB version) and $399 (64MB version), it is unknown how many units they actually sold, but many sites around the web spawned to cover Zodiac information, game reviews and new releases.

If TapWave decided to use an open-source Linux-based OS, it may very well be alive today with growing third party support, but their restriction to Palm OS was invetibley what killed them. The operating system is practically abandoned at this point by the manufacturer and the games are of no comparison to the Sony PSP. Their timing was also off, competing in the market with Sony in Nintendo is practically useless, big corporations have taken over our marketplace, it’s harder for smaller products to become mainstream and compete with mammoth marketing dollars.

TapWave will no longer support the Zodiac, Accessories or it’s games. Current retail stocks will be sold until unavailable, check TapWave’s site for a list of resources and support sites.