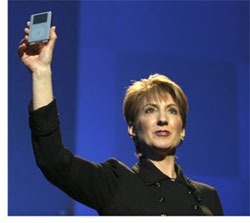 A deal that never made much sense to begin with has now been terminated. Hewlett-Packard announced Friday that they will stop selling Apple players not even two months after their arrangement to sell a re-branded Apple iPod Mini.

HP contributed to 5 percent of all iPods sold since January 2004 and 8 percent in the prior quarter of this year.

Due to the agreement with Apple, HP cannot develop or market new music players until August 2006. Hopefully this will give them enough time to figure out something not to reckon with. In the meantime, HP will most likely sell off any left over iPods in their stock and continue to support the iPods they have sold in the past.

The original HP and Apple offering was brought forth by none other then HP’s former CEO Carly Fiorina. Times have changed, Carly’s gone and maybe HP is getting smart, they must have asked themselves why are we pushing another companies brand?