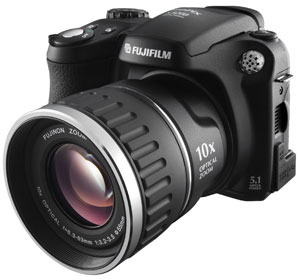 Three seems to be the popular number of products manufacturers are releasing at a time these days, it may be good luck, or just a coincidence, but Fujifilm has just announced the new FinePix S9000, E900 and S5200 cameras to the North American market.

The Fujifilm FinePix S9000 is the Digital SLR-type (ZLR) of the batch, it uses a 9.0 megapixel Super CCD HR sensor, a 10.7x optical zoom lens capable of 28-300mm wide-angle equivalency with an f2.8 to f11 aperture and a large tilting LCD screen for shooting from various angles. You can also shoot in RAW file mode, 30 fps video at VGA resolution and it offers dual media slots, hot shoe mount for external flashes and a high resolution electronic viewfinder.

The Fujifilm FinePix E900 is their latest E-series camera, it offers a 9.0 megapixel sensor, 4x optical zoom, large two-inch LCD screen and even supports RAW file formats and optional lens adapters. Real Photo Technology allows the E900 to capture images with higher shutter speeds with ISO settings of up to 800.

The Fujifilm FinePix S5200 is a mid-level point and shooter, it has a 5.0 megapixel sensor in an SLR-like body. Optical zoom is at an impressive 10x and various features include manual shooting mode, continuous shooting, continuous auto-focus, shutter priority AE and aperture priority AE.