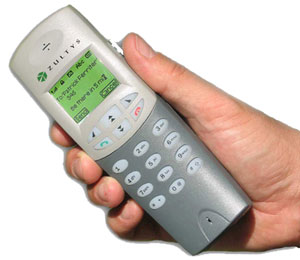 Zultys Technologies is adding the WIP 2 wireless IP phone to their line-up of VoIP products. Zultys has basically taken their ZIP 2×2 desktop IP phone and converted it to the mobile platform, all the features and functionality in the ZIP have been included. The phone is built on open standards and operates on a highly stable Linux OS.

“Customers would like the ability to take their desktop IP phone with them rather than have a second mobile unit with reduced capability. Other WiFi IP phones coming into the market today don’t provide users with enough features or sufficient battery life. The WIP 2 excels in all areas.” explained Iain Milnes, President of Zultys Technologies.

The WIP 2 gives users four hours of continuous talk time, 12 hours standby. It will ship in November, pricing will be announced in October.