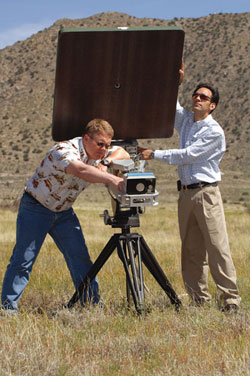 When you think of Gigahertz, home phones or wireless video devices come to mind, but what about an advanced weapon to control crowds in a riot? This is precisely what Raytheon Company has developed.

The Active Denial Technology is a non-lethal weapon classified as “less lethal” by the US Pentagon, it will fire a 95Ghz non-ionizing electromagnetic beam of energy that penetrates approximately 1/64 of an inch into human skin tissue, precisely where nerve receptors are located. After a few seconds the skin exposed to the beam will heat up and intolerable pain is experienced.

Test subjects have reported the beam as feeling similar to touching a hot frying pan or intense heat from fire. Burns are prevented by limiting the beam’s intensity and duration, surely it could be elevated to cause extreme pains or even death.

Many questions about the device have yet to be answered. Neil Davison, coordinator of the nonlethal weapons research project at Britain’s Bradford University asked “What happens if someone in a crowd is unable for whatever reason to move away from the beam?”

Sadly this machine is due out for service in Iraq by 2006, a mobile version will be called “Sheriff”. It would be nice to see technology developed to stop riots from ever even happening at all, some type of tranquility beam, where everyone chills out once zapped, but instead the powers that be tend to look at things from the other side; to cause great pain and fear.