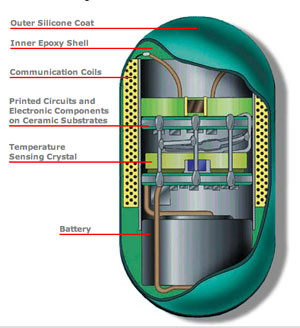 A radio pill that transmits a player’s body temperature to a nearby wireless device may be considered for use by the Minnesota Vikings.

Four years ago the Vikings former linesman Korey Stringer died of a heatstroke. The Vikings attorneys claim that Stringer’s use of the controversial supplement ephedra was the cause of this stroke, his right guard David Dixon, Stringer’s training camp roommate, said in a signed affidavit that Stringer told him he used Ripped Fuel the morning of his death.

Regardless of the circumstances, it is common knowledge that most football players in the NHL use supplements that are marketed to increase body mass. When this is done, the body does not function properly and can over heat, a device like the HQ Cortemp ingestible core body thermometer pill could help trainers monitor players that they may feel are susceptible to this type of threat from the use of supplements or just plain over exertion.

An RF compatible miniaturized data recorder was designed to monitor, record and report real-time core body temperature in time-correlation with heart rate. Each pill costs about $40, though the price varies according to volume, NFL teams pay closer to $30 a pill. The RF monitor is extra.