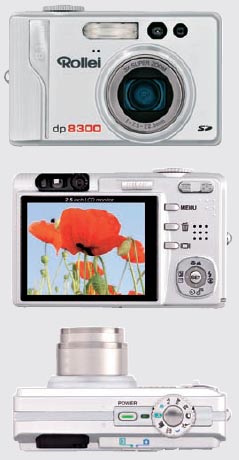 Rollei has added two new cameras to their line of digitals. One is an 8-megapixel camera with the model name dp8300, and the other 6-megapixel dp6200.

The dp8300 is housed in a full metal body with a large 2.5-inch LCD and 3x zoom lens. Nothing too groundbreaking with the new model, the features are pretty standard except for the 8 megapixel CCD, but even that is becoming quite common. The dp8300 also features a 640×[email protected] movie mode, 5-50cm macro mode, high quality TIFF mode, and slow USB 1.1. To store your photos the camera will take SD cards of capacities up to 1GB and it will come packaged with a 64MB card. The camera should hit streets by the end of July for around $420US.

The second camera, the dp6200 is also housed in an all metal body and features a 6-megapixel sensor. Also featured will be 3x optical zoom, large 2.5-inch LCD, and voice recording. Like its bigger brother it will take SD cards up to 1GB and includes a 64MB card. Expect to see this one for around $340US.