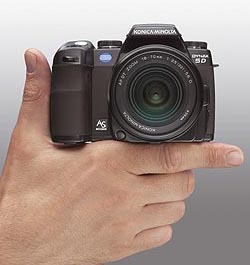 Konica Minolta announced today that they will be releasing a smaller and lighter version of their entry level digital SLR, the Maxxum7D. The new model, the Maxxum 5D is Minolta’s answer to Nikon’s D50 and Canon’s 350D as it includes most of their big brothers features but is hindered in some areas.

As for the camera body, it is made of sturdy glass fiber plastic and it will be slightly smaller and lighter (by 22%) than its bigger 7D brother. A large 2.5-inch LCD screen will be found on the back. The 5D will capture pictures at 3 frames per second for a total of 10 consecutive shots in large/fine JPEG mode. The autofocus is a cross hair type 9-point and 8 line AF sensor for tracking both stationary and moving subjects with ease. The press release doesn’t cover what type of storage the 7D will use, but if it goes the way the Nikon D50 went, expect to see something like Secure Digital (SD) cards.

No word yet on pricing or availability, but the 7D version goes for around $1200 US, so using your imagination you could come to a ballpark figure quite easily.