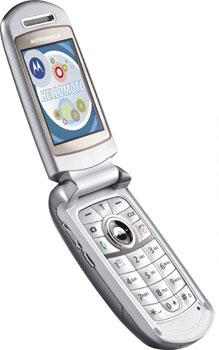 Verizon Wireless has pulled the Motorola E815 mobile phone from their product line faster than it was introduced. The official reason is unknown, but their 1984 like actions of simply deleting all related information from their web site has upset many customers.

The E815 is no longer listed in the Verizon available phones, for a handset that was just announced last week it’s strange to see it go so fast.

A reader wrote to us about his recent purchase of the E815, it appeared to be fine until he tried to subscribe for the V CAST service; which was not possible. Apparently after some investigation, a batch of the E815 handsets (maybe all of them?) were not provisioned with V CAST and he was told to return it for a new one; and of course no new ones are around.

[Thanks to Howard Frankel for the tip]

[Update] After a lengthy and threatening telephone conversation with Verizon Wireless’ media representative Brenda Raney, they have confirmed that the E815 being pulled from the website is only a “Glitch”, the handset however is still available from retailers.

V CAST service issues were unknown to Verizon but their in-store employees have confirmed that some E815’s shipped with V CAST disabled, and had to be either sent back to the warehouse or have software updates.