3D Realms, makers of the popular 3D shooter Duke Nukem have announced that they have developed a mobile version of the game, Duke Nukem Mobile 3D. Now if only they could push their 10-year-in-development game “Duke Nukem Fornever”.

The game wasn’t actually developed by 3D Realms, they are too busy developing Duke Forever. Machineworks NorthWest, BREW game developers, created this version based on the original Duke Nukem for PC which was a pinnacle in first person shooter gaming.

3DRealms website indicates that the game works on the following phones; Motorola T720, LGE VX4400, LGE VX4500, LGE VX6000 and the Samsung SCH-A530. That might be a list of phones they have tested it on, not the only supported phones. I’d imagine it would work on most BREW enabled handsets. If you happen to have a Zodiac Tapwave you can also grab the game if you have a free 7MB. 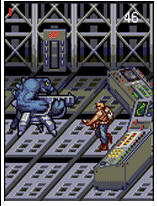