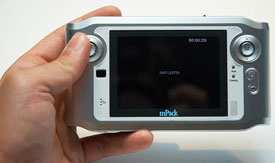 PQI, makers of PC Memory and solid state disks, have produced a Portable Video Player called the PQI mPack P800. When the mPack arrived I was immediately surprised with the quality of the packaging. Now usually I’m not interested in this kind of stuff but PQI really impressed me with the box and I immediately knew that the P800 was going to be a quality product.

Unpacking the mPack also yielded more surprises. The P800 comes with not only one, but two carrying cases. The first is a little soft case that keeps your player safe from nicks and scratches while floating around in your bag. The second is a full blown travel case which can fit all of your accessories for when you take it on a trip and need to bring the power cord and TV connectors. Both bags are quality items.

Also included in the box is a set of quality ear bud style earphones with changeable colors. Each bud outputs 35mW of sound and is capable of frequencies up to 27,000Hz. They also come with a control half way down the line which allows you to control your PVP via the play, stop, volume up/down, and skip track buttons.

And lastly, but not least, is the remote control. You can do anything from the remote that you can from the player, both M and H buttons, volume, skip, next, stop, pause, etc.

On the front you have two different control pads which are explained further in the review, the power button and a quick record button. On the top is the A/V out, A/V in, SPDIF digital audio, CF card slot, USB 2.0, and a DC 5V connector. On the back is a kickstand allows you to rest your mPack on a table so it stands upright. This feature is extremely handy as we have reviewed other players without this feature. For example; the Archos AV320 makes it quite annoying to enjoy a film. If you haven’t propped it up against something, you just have to hold the player in your hand for the duration of a film.

Inside the device is a Samsung MP0402H 40GB hard drive big enough to pack over 50 Divx movies, weeks worth of music, or your whole digital photo collection. When the device is running you can hear a slight humming coming from the drive, but not enough to hinder your experience. The mPack also comes in an 80GB version.

Battery life should last you for 4.5 hours watching videos, 10 hours for audio due to the LCD screen shutting off, and it can recharge itself in around 6 hours. You can customize different auto shutoff functions through the system menu to save battery power.

The mPack P800 supports MPEG 1/2/4, DivX, XviD, WMV, and ASF formats which is pretty impressive as I can’t think of any other codec I would miss. First off, let me state that the quality of video that it plays depends of course on the format and quality of the file that is being played. In this particular instance the P800 supports videos of 800×576 at 30 frames per second as its maximum quality. Another obvious item that hinders quality is the screen that the device houses, PQI has this nailed. Their screen is a high resolution 3.5-inch 320×240 pixel TFT LCD screen that allows for great brightness and contrast adjustments.

Also included is a Video recording option which allows you to plug your P800 into your TV, VCR, DVD player or anything that has RCA out, and record your favorite shows and movies. You can decide how long you want the device to record for so you can leave it unattended, but that’s basically all you can do in the recording department. You can’t pick the quality of recording nor can you set times and dates for it to record like with TiVO. I was browsing the mPack forums and they mentioned that new firmware was in the pipe to allow recording at higher quality with a due date of August.

The device records in MPEG1 mode at approximately 5MBs per minute, which lead me to suspect poor recording quality. Upon further investigation I determined that the video records in 352 x 240 resolution at a low audio and video bit rate using the Lingos codec. It looks OK on the player, but pretty bad when you watch it on your PC; definitely not a good way to backup your DVD collection. Let’s hope they come out with that firmware soon.

The P800 has support for a huge range of audio file formats including; MP3 CBR/VBR, WMA, AC3, AAC, WAV, and OGG. What more can you ask for?

From the software player end of things, PQI did a nice job on the interface. It includes a scrolling time indicator, volume indicator, and various icons to indicate various play modes. Also, in the menu you have the ability to add selected tracks to a custom M3U play list. In the settings menu it also has different equalizer settings (Normal, Jazz, Pop, Rock, Classic 3D Sound (music), Digital Theater Sound (movie, SPDIF))

Not much else to specify here except that the quality coming from the device is great.

On the top of the P800 is a SPDIF digital audio optical port that you can plug into your digital receiver for excellent sound. You can also play music out the built in speaker, which sounds like a tin can. But that is expected when you pack so many features into such a small device.

Also included in the audio category is the ability to tune into FM radio. The interface used for the radio is the same as the music player and allows for 10 customizable preset stations. The submenu also includes the following options; band selection, stereo noise cancellation, and high cut control. What these do is a mystery to me. There is also the built in ability to record radio, and speech on the device, but yet again; not great quality.

The mPack is packed with imaging features, and definitely crushes other PVP’s in this category with one foul swoop; it has a built in Compact Flash reader or Memory Stick, Secure Digital, MultiMediaCard and SmartMedia cards are supported through the optional CFC interface 4-in-1 adapter, a photographers rejoice! Not only that, but it supports RAW file formats from your favorite digital cameras. The supported file list goes as follows; JPEG, GIF, BMP, Raw Image (CRW, NEF, ORF, RAF, MRW, etc.).

The image viewer itself is fully featured with the ability to rotate photos on the fly, zoom in/out, add images to an album on the fly, and run a slideshow (which can also be output to TV). That’s not all; you can also view EXIF data and both Y/RGB histograms. The P800 is perfect for the digital photographer as it allows for backup storage when your compact flash card becomes full. You can put a CF card in the slot and pick and choose the photos that you want to transfer right through the easy to navigate file manager. Pretty slick if you ask me.

The P800 has two different controller joysticks on the front on each side of the screen. The left control, the H stick, controls the volume, stop, play/pause, and upon clicking activates a submenu for quick bookmark navigation around the player.

Well, I must say I have definitely seen better software over my days here at MobileMag. The PQI mPack PC program leaves lots to be desired but luckily you don’t need to run it unless you want to fiddle with play lists and genre databases.

As for the device itself I ran into quite a few problems with it booting up requiring mucho amounts of trouble shooting. Each problem started with the inability to boot past the PQI boot screen. First time, I had to chkdisk the hard drive which found a bunch of FOUND.000 files which I presumed were the system files. After that I had to redo the firmware and she booted fine. Lucky for PQI I actually know what I’m doing, but for the average consumer, it wouldn’t have been fun. Definitely some negative points in this category, but they seem to keep at the firmware and actively check/respond to their forum, a company that supports their product (through thick and thin) is A-OK in my books.

The second problem is still happening. The P800 will boot and not go into the operating system; it just hangs at the PQI loading screen with the green RUN light flashing. I have to constantly turn the device on and off until it boots properly. Rather annoying. I will contact PQI and edit the review once I determine the problem.

Maybe I received a defective device? Or maybe I need to reformat and start fresh with the latest or previous firmware. Regardless, the regular consumer shouldn’t have to deal with the trouble I have.

The mPack also has different personal information management tools built in such as an address book, calendar, clock, and Chinese language guide. The PIM software is a good idea, but it’s very unlikely that you would ever use the device as an organizer as it has no keypad except its virtual one. You can enter the data through the PC software but in my opinion it’s not worth the hassle.

Despite the problems with the software and the non-booting I really like the PQI mPack P800. It’s a solid device when it’s fully functioning. The screen is far better than some of the cheaper models, it has excellent functions for digital photographers, and the list of supported codecs and file formats is extensive. If PQI released a software development kit for the P800 it would be definite competition for Archos and their new media player.

For you audio junkies, you will LOVE the SPDIF out port. It’s like having your own portable high definition theater.

If you are a movie junkie then the mPack is for you. You will be able to store your favorite movies on your device and constantly keep impressing your buddies with your newest flicks. No longer do you have to hassle with converting DiVX files to DVD or VCD. I even cringe thinking about how time consuming that is.